Bill Rosenberg is the Policy Director/Economist at the New Zealand Council of Trade Unions Te Kauae Kaimahi. He is widely published on globalisation, trade and e-learning. You can read Bill’s monthly economic bulletins here.

For the past five years, the Council of Trade Unions has analysed how much was approved for Health spending in each year’s Budget. The theme is “Has Health been given enough to stand still?” We look at the costs, the population pressures including the ageing of the population, and the promises for new services, and compare them to what is actually provided. You can see the reports which give details and show the assumptions we used here.

Treasury estimates of real changes in health spending after costs and population growth. 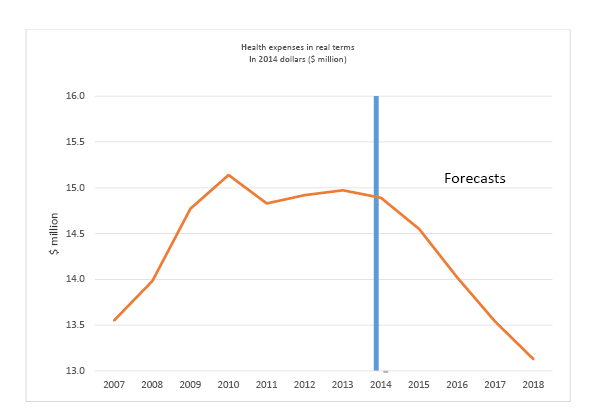 In the 2014 Budget we estimated that the Health Vote was $232 million behind what is needed to cover announced new services, increasing costs, population growth and the effects of an ageing population.

The Health Vote increased by $307.9 million in operational funding overall between Budget 2013 and Budget 2014 (from $14,134.6 million to $14,442.5 million). This is $185.6 million short of the $493.5 million we estimated was required just to keep up with costs without providing for new and improved health services. However the Budget in addition introduced “new policy initiatives” costing $120.1 million in 2014/15 (putting aside the bulk of the “initiatives” which were actually funding towards increasing costs and population pressures), bringing the total needed to $613.5 million. This was offset by “savings” totalling $73.6 million including $56.7 million that are not explained, plus a reduction in the provision for risks such as epidemics or natural disasters of $17.0 million. If we take the savings at face value, the total shortfall is therefore $232.0 million.

District Health Boards (DHBs) were underfunded by an estimated $94 million just to cover increased costs and demographic changes. When the costs of new services which the DHBs are expected to provide are taken into account, the shortfall is likely to be well over $100 million.

We don’t look at capital funding in any detail, but it rose sharply: from $520 million in Budget 2013 to $1,114 million in Budget 2014. This follows a significant increase in capital expenditure last year. In the 2012 Budget, $289 million was budgeted for capital. The Ministry of Health had observed in its Four Year Plan that “Capital investment is needed nationally because a significant proportion of hospital buildings are in poor condition”[1]. While the increase in capital funding is much needed, increased capital assets create additional costs for DHBs because they have to pay the government capital charges and must provide for depreciation. As Treasury noted in 2013 Budget papers, “new capital builds are more likely to result in large deficits for DHBs”[2].

We also had a look at the cost of the welcome policy initiative to enable children under 13 to have free access to GPs and free prescriptions from 1 July 2015. Our estimate was that it could cost closer to $40 million per year rather than the $30 million in the Budget estimates.

How good are our estimates, and what about the forecast funding for the four years to June 2018 which are part of the Budget? In past years, Ministry of Health estimates of the funding shortfall were released, but they were largely redacted from documents released following the 2013 Budget.

However, for the year to June 2015 (financial year 2014/15) Treasury is forecasting health to have a real growth of negative 2.3 percent according to its spreadsheet issued with the Budget. On their figures we calculate that represents a shortfall of $360 million. So our estimate is conservative.

Greater cuts are forecast for the following three years. In the event, Health could get some more from the ‘operating allowance’ for new spending in those years but not enough is being allocated for this to cover the shortfalls in all the areas of the forecast Budgets, most of which will be in a similar position to health. (See the May CTU Economic Bulletin for more detail.)

Treasury warned in the preparation of the 2013 Budget that such cuts would require major changes to our health services. This could include “more targeted services and funding” which implies dropping services, making some available only to certain groups, or introducing user charges[3].

3 thoughts on “The underfunding of DHBs”