Caregiver’s week happens every year on the third week of March. It was started by members in NZNO working with older people, to celebrate the work of caregivers, their importance in the lives of families, and to the whole nursing team.

This year, caregivers’ work is in the news, as the Government negotiates with the unions and employers on a settlement for caregivers’ pay, after Kristine Bartlett’s equal pay win in court. We know that caregiver’s work is undervalued- but how well do the people making decisions really understand what carers do? MPs might get paid a lot more than our members, but if they had to do carer’s jobs, would they shape up? We decided to find out.

We invited all the parties with Wellington-based MPs to send an MP along to a real aged care facility, and spend a couple of hours ‘trading places’ with a caregiver. The Labour Party and the Greens agreed to give it a go. Unfortunately Kris Faafoi was unwell on the day, so Jan Logie was the extra pair of hands for lunch service at Cashmere home in Johnsonville. 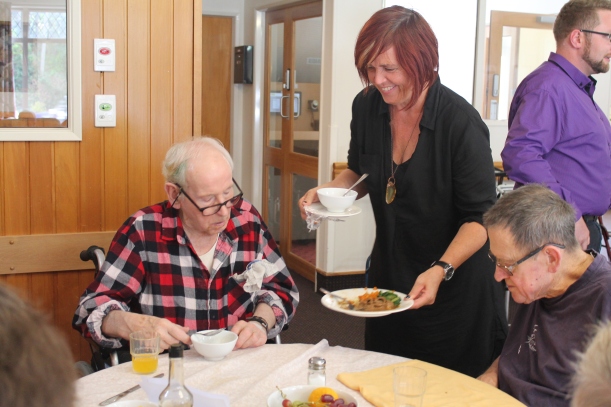 The atmosphere at Cashmere home was lovely and calm. The residents in the lunchroom were happy, relaxed, and well attended by all the staff, despite their very different needs. After Jan was done serving, she sat for lunch with a table of chatty residents. Margaret was visiting her husband John, just like she has every day since his stroke. “He never came home from the hospital. He went straight into care…. I wouldn’t have been able to cope at home.” John and Margaret lived a very full life and are still interested in current affairs like caregiver pay and the union movement. The other night they went out, with the help of staff, to a classical concert. They chose Cashmere because of the positive feel, only possible because of the constant attention of the carers. Their care for John has allowed Margaret to not worry so much and keep her own independence. 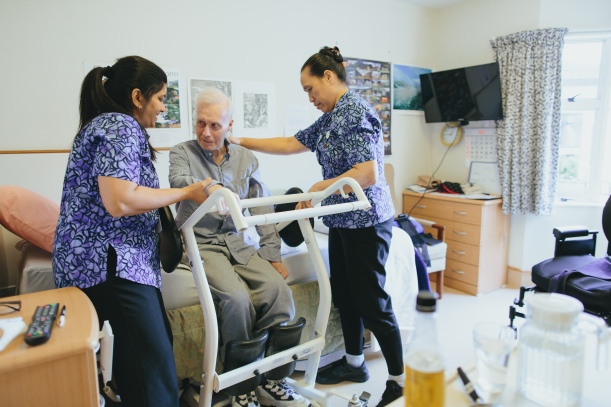 After lunch, Jan helped clean up, and move resident Therese from the lunchroom to the lounge in her chair. Therese likes to be over by the window and the two brightly coloured pet birds. Jan struggled to steer the big armchair by herself, and nearly got caught on a doorframe! Luckily Therese didn’t mind, and NZNO delegate Dilani came to the rescue. Jan joked that it would be her exercise for the day! She spent the whole time she was helping talking and listening intently to residents, and apart from the one break at lunch, she was walking around non-stop. 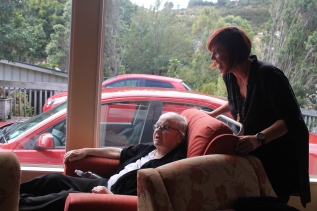 Jan and Dilani sat down afterwards for a chat about how it all went.

Next edition- The caregivers go to parliament, and we find out what they think about MPs.

Teuila (not her real name) arrives at work early for every shift. The tasks she performs during her shift are as varied as the residents she works with. She assists our elders in all their everyday routines as well as going the extra mile – sometimes dispensing medications, sometimes catheterising a resident, sometimes bearing the brunt of violence and aggression from a resident with dementia.

Not everyone can do a job like Teuila’s. It is a highly skilled and demanding role, with barely any recognition in the form of pay but much in the way of love and appreciation from the residents themselves.

When Teuila talks about the work she does, she talks about the pleasure she gains from helping an elderly person regain dignity and well-being, how great it is to build a relationship and see self esteem and quality of life maintained for a resident, how satisfying it is to be part of someone’s transition from anger and sadness to happiness and acceptance.

As a caregiver Teuila is amongst the lowest paid in the country and from April 1 this year, her job became a minimum wage job when the three largest aged care collective agreements in the country had their bottom step wiped out by an increase of the minimum wage to $14.25 an hour.

It is no accident that the most significant test of the equal pay legislation for many years has originated in aged care. You do not need to be a lawyer to see that the amazing people doing this work are being underpaid and exploited. You can work as a check out operator at a supermarket and be paid more.

What is really interesting is that after many years of crying poverty as a reason for not paying aged care workers more, but doing little about the situation, the Aged Care Association (ACA) and its members are standing up to a Government that has continued to significantly underfund the care of our elderly.

This week they refused to sign contracts with DHBs citing among other things, underfunding, and saying that the current funding levels were unrealistic to provide increases to hard working caregivers and maintain and improve the quality of life for those in care.

Such public action by members of the Aged Care Association is rare and if their figures are to be believed is a sign of the negative impact of continued Government underfunding.

What is disappointing is that the Aged Care Association has not asked the Government for funding increases to fairly pay aged care workers, but solely focussed on their own immediate costs and expect aged care to remain a minimum wage job.

The problem is that the ACA wants an increase in funding of 7.6 percent – but there is no way they are going to pass that 7.6 percent onto our members. They made it very clear that there would be no pay increases offered this year. Perhaps we would feel the love more if they asked for more funding, and for it to be earmarked for staff pay rises, retention and development.

Teuila deserves more – and so do the thousands of caregivers who do the important work of looking after our grandparents and mums and dads.