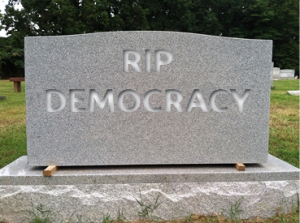 Last week the Minister of Health announced that Kathy Grant will stay on as commissioner of Southern district health board until 2019. Democracy is at a premium in the south these days.

Grant was appointed by the Minister in June and is paid more in a day than most nurses get in a week. Apparently her $1400 a day pay rate is due to the “personal risk to her reputation” of having to improve the DHBs finances in such a short period of time. To us, that’s a clear signal that Minister Coleman is aware that the cost-cutting and service-cutting that will ensue will be hugely unpopular.

Only time will tell as to the true cost of “savings initiatives” now that Grant and her team have an extra three years to deliver the required savings.

Grant has promised a “whole of system change with more care in the community, reducing waste and working in more efficient ways.”  Integration of primary and secondary services is on the agenda and this will likely lead to more hospital-based services being directed to primary services with PHO and other private providers having more say on the way health services are governed, managed and delivered.

We will have to wait and see what will be proposed, but I am concerned that this current Government will exploit the sacking of the Board and appointment of a commissioner to move towards more privatisation of public health services in the southern region as a model for the future.

The commissioner has delivered on her commitment for improved communication with DHB staff and stakeholders, with meetings and regular updates. Long may that continue.

Although, the commissioner’s goals appear laudable; it’s the how? and at what cost? we need to keep a careful watch on.

The citizens of Southland and Otago no longer have democratically elected representatives governing their health services. The Minister and his appointed commissioner have enormous power to implement change.  Whose interests will be served will remain unclear for longer, now that voters will have to wait until 2019 for democracy to be reinstated in the southern region.