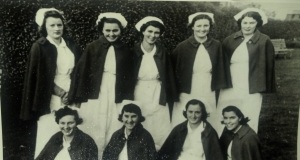 Yesterday one of our NZNO organisers, Georgia Choveaux visited an inspirational 92 year old retired nurse about voting in her 25th general election.

Cog, as she prefers to be known, is as committed to voting now as she was in her very first election in 1943. She trained to become a nurse during the second world war because she wanted to do her bit and had always liked helping people. She still remembers her salary – 3 pound five and six a month and she says with pride, “Nurses were worth every one of those pennies!”.

At 92 Cog is still voting because she wants to see  changes in the system – and to retain her right to complain. She is very certain you can’t complain if you don’t vote. She explains it is a lot easier for young ones these days to know which way to vote for what is important to them. Back when she became a voter  there was no television so you had to really try hard to keep up.

Cog has kept up with what is going on in the lead up to the 2014 General Election and has worked out who has earned her votes this election. She has changed who she votes for over the years – and given others a try – some times for better or worse in her opinion. Yet, she would never consider not voting. It is too important for her as someone who has always liked helping people.

So, hats off to the many generations of nurses, carers, patient advocates, health champions, kaimahi hauora and professionals for looking after the health of Aotearoa by being voters. Where would we be without you?