Today, the 31st of May is World Smokefree Day. Every year the Health Promotion Agency puts out great resources for people want to quit smoking and stay off tobacco for good. They have infographics to download and motivational facts like the one below. Not many people know that smoking makes you deaf!

Researchers have identified though that without further big changes, New Zealand will not reach our smokefree 2025 goal, particularly for Māori and Pacific communities. That’s why NZNO was distressed when we heard last year that funding for some iwi and community smoking cessation providers was being cut, as well as for advocacy services like the Smokefree Coalition. NZNO Kaiwhakahaere Kerri Nuku said ““It doesn’t make any sense that on the one hand the Government supports the goal of Smokefree Aotearoa 2025, but on the other is pulling funding out of Smokefree advocacy services including the Smokefree Coalition, ASH and Smokefree Nurses. Every day we see the effects of smoking on our patients’ physical and mental health, and the social, economic and cultural wellbeing of their whanau. It’s heartbreaking.”

Nurses working to stop smoking in the community say they need advocacy and specialist services to refer patients to and reinforce their stop smoking message. Porirua Community Union’s Litia Gibson talked about the need for these services to NZNO last year in this video. “Any cut will affect all our services. Because it’s not just the services we provide, it’s the patients and the populations that we are caring for who are already in vulnerable positions.”

NZNO decided to run a petition with Together, the digital campaigning arm of the Council of Trade Unions, to ask for more funding for these services. Today, we delivered 1823 signed names of nurses, caregivers, midwives, kaimahi hauora and their supporters to Marama Fox MP, in recognition of the longstanding work that she and her predecessors in parliament have done on ending smoking in New Zealand.

Litia and Marama had a little chat afterwards where Litia broke down the issues around referral services and increasing workload for nurses. “Without specialist services, we don’t have the time. You need to pack so much into an appointment, because with health funding where it is, community need is so great.”

Marama agreed on the need appropriate smokefree services and the future benefit this can bring to our country. “Being smokefree puts real money back in the hands of whānau. It protects our future generations, and ensures they don’t have to make the same decision to quit because they never start. It’s all about whānau.”

Marama had brought along a beautiful kete to put our petition in and present it to parliament. Litia in return swapped her red flower to put in the MP’s hair for the afternoon- ‘There, now your outfit is complete!’ 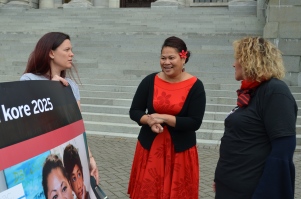 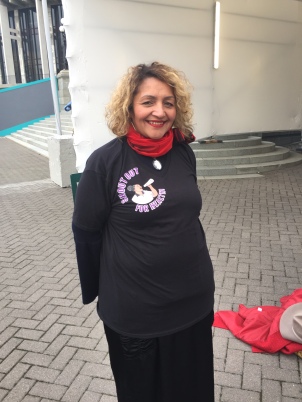 We are proud that a little bit of NZNO is being delivered to parliament on World Smokefree day to support our Smokefree 2025 goal. Kia kaha koutou, thank you for supporting this mahi. Your names are now part of history.

This blog is by Cee Payne, Industrial Services Manager for NZNO. Cee represented NZNO as part of the cross union bargaining team in the hard – won settlement offer for caregivers. Here she outlines some issues with the new proposed law, and what NZNO members can do to make it better. 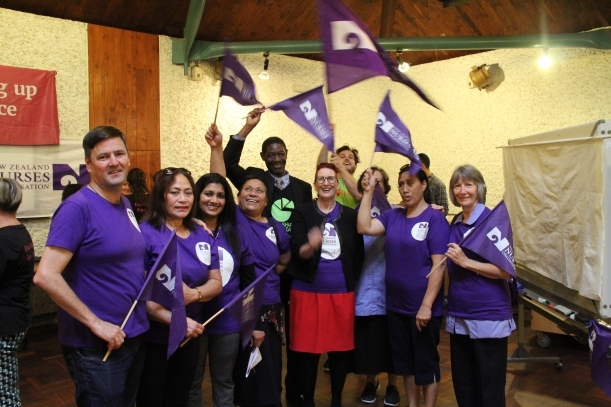 Pay equity/equal pay has been on a roller coaster ride in the last few weeks in New Zealand. First, we had the historic announcement of the Government’s $2 billion offer of settlement for Kristine Bartlett’s pay equity case for caregivers. The mood from caregivers across the motu was one of total relief and celebration. These women have been waiting so long on the minimum wage or close to it for better recognition of their value. It felt like the confetti had barely settled the very next day when the Government announced they were introducing a new draft Employment (Pay Equity/Equal Pay) law. This law includes a new ‘principle’ –the ‘proximity principle’ – that could have stopped Kristine’s case from ever happening

The mood of celebration turned into a gasp of disbelief from many of our members, who understandably worry about what this means for them. Unions were just as upset at both the message and the timing. The really annoying thing is that apart from this problem and a few other issues we can improve on, the new law sets out a better and easier process for making future pay equity/equal pay claims. It means other groups of women don’t have to go through many expensive rounds of court battles to achieve pay equity/equal pay.

I was one of the negotiators on the pay equity settlement for care and support workers and on the cross union, government and business equal pay principles working group. We had nearly two full – on years of research, meetings, and consultation to get the result we did for care and support workers. And although it was a long process, I believe the principles we used can work, if they are not restricted by this new ‘proximity principle’. In fact, New Zealand will probably have the best pay equity/equal pay law in the world if we can sort this out. 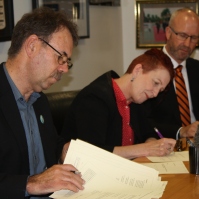 Cee signs the terms of settlement for the caregiver’s offer in parliament on behalf of NZNO after two years of negotiations. John Ryall negotiator from E tū picture at left. 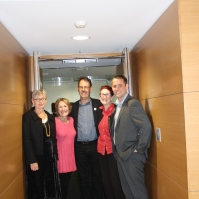 The negotiations team with Kristine in the Beehive

Kristine and the negotiation team signing the terms of settlement of the pay equity offer for caregivers in the Beehive, Monday the 2nd of May 2017. Cee is signing on behalf of NZNO.

Pay equity is being paid fairly for different jobs that are similar, and equal pay is being paid the same as men for the same work. What the Government is proposing for pay equity is that for women in historically female dominated jobs you have to first find a relevant male-dominated job to compare yours to in your own workplace. Then if there is no relevant job available, you can look in your own industry before you can look outside your sector at other jobs done mostly by men with the same or similar skills, training and responsibilities. So for Kristine Bartlett for example, her employer wanted to argue she should be compared to a gardener working at a rest home. But wages are low across the whole aged care sector because it is female dominated, so her union E tū thought she should be compared to a Corrections Officer-a better fit for her skills, responsibility, effort and conditions of work. These male dominated jobs are called ‘comparators’.

Finding the best comparator or even multiple comparators can be a long process but it’s an important one to get right. There will be no perfect male-dominated equivalent, so you might need to take one job for the qualifications, another for the effort, and a third for similar conditions of work to make your case. NZNO believes it’s really important we find the best job, not the physically closest, especially since so much of the health sector is female dominated. Otherwise, equal pay cases could be artificially restricted by the same discrimination we are trying to re-balance.

The good news is it’s not too late. The Government is taking submissions on the new law until the 11th of May before it has to start going through parliament. The more people that write to them, the better chance of removing this new principle to get the fairest comparators. It is imperative the Government passes the best pay equity/equal pay law in Aotearoa/New Zealand.

We don’t know yet which other parts of the membership could be eligible for cases in the future, or if police, engineers, or any other job would be the best ‘comparator’. NZNO is committed to 100% of our members who are performing work historically undertaken by women achieving pay equity/ equal pay. There are existing pay inequalities between different groups of our membership, and we need to carefully go through each group once we have the new law. Any case of course would involve significant consultation with and campaigning from members, just like we did with caregivers.

But right now the most important thing for all future cases is getting a fair and sustainable law that works. For that we need your support. If you feel passionate about women being paid for their worth and ending gender discrimination forever, write to the Government right now and tell them why you don’t support the ‘proximity principle’ before they write it into the law. Send us a copy of what you said too by emailing nurses@nzno.org.nz. It could be the best invested 5 minutes of your life.